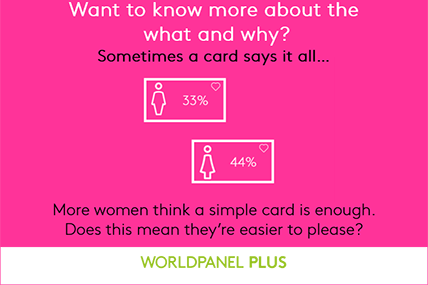 From dining-in deals for two to bouquets of flowers; what clues does Valentine’s Day 2017 hold for how Brits will spend the romantic festival this year?

2017’s Valentine’s day was a valuable one for retailers, as shoppers splashed out a whopping £43 million extra compared to an average non-Valentine’s fortnight, with M&S and Tesco taking the largest share.

As households tightened their purse strings in 2017, more consumers stayed at home and treated themselves instead of dining-out. Meal deals played an important part of their celebrations with 7% of all British households participating in dining-in offers which saw deals priced over £10 grow at 27%. All three courses were on the menu; chilled desserts became much more popular in 2017 and featured in 60% of all deals.

Roses are red violets are blue

Flowers are synonymous with February 14th and they remained a popular way to say I love you in 2017. On average, flowers priced less than £5 made up most of the sales over Valentine’s, however 20% of bunches sold were priced £10 and over. The three most popular choices were daffodils, roses and tulips.

Last Valentine's Day, red wine was the most popular romantic tipple, accounting for almost 20% of alcohol purchased in the week before the big day. Although it may not knock red wine off of its pedestal, sparkling wine's inclusion in meal deals this year may see its popularity soar, as people look to treat their loved ones to a bit of celebratory fizz.

Learn more about Valentineâs Day with Worldpanel Plus