The latest grocery share figures from Kantar Worldpanel, published today for the 12 weeks ending 3 January 2016, showed no Christmas uplift for the British grocery market as sales fell by 0.2% on last year thanks to continuing price deflation. However the discount retailers, Waitrose, the Co-operative and Sainsbury’s successfully grew ahead of the market and were the share winners over Christmas.

Fraser McKevitt, head of retail and consumer insight at Kantar Worldpanel, explains: “Shoppers reaped the benefit of falling prices this Christmas, with groceries 1.8% cheaper than last year. The amount spent on a typical Christmas dinner fell even faster – down by 2.2% – mainly due to cheaper poultry and traditional vegetable trimmings. Alcohol sales increased thanks to a surge in popularity for sparkling wines including Champagne and Prosecco, which increased in value by 11%.

“Wednesday 23 December was the single biggest shopping day of the year, but the anticipated uplift from an extra day in the week before Christmas didn’t help the supermarkets overall. Consumers simply delayed their shopping trips later this year, rather than making any extra trips.”

Once again, Sainsbury’s was the best performing of the traditional supermarkets. Its premium Taste the Difference brand posted its biggest ever Christmas sales and promotional efforts were concentrated on simple price cuts rather than complicated multi-buy deals. This helped attract an additional 114,000 shoppers, with sales increasing by 0.8% on last year.

The structural upheaval caused by discounters Aldi and Lidl continued into the Christmas period. Lidl was the fastest growing retailer overall, with sales up by 18.5%. An expanded product range, especially in its Deluxe premium line, has encouraged consumers to increase the size of their shop, with average basket sizes up by 7% to £17.20. Aldi followed with an increase in sales of 13.3%.

Fraser McKevitt continues: “The discounters are continuing to establish themselves in the minds of British consumers – almost one in eight did their single biggest December shopping trip in Aldi or Lidl, on top of the 15.6 million households who visited at some point in the 12 weeks. That is an increase of nearly one million shoppers on last year, and their combined share is up from 8.3% last year to 9.7%. Despite Aldi and Lidl’s success, consumers are still spending most of their money in more traditional supermarkets, particularly in December, and total discounter share has dipped from the 10.0% achieved just before Christmas.”

While Tesco sales fell by 2.7%, an investment in its ‘festive five’ fruit and vegetable promotions meant it was an improvement on last month’s performance. The retailer’s share went down to 28.3%, with Asda and Morrisons also declining to 16.2% and 11.0% respectively. Morrisons share loss was expected as it continues to feel the effects of recent store closures, and the retailer hasn’t repeated last year’s Christmas Bonus loyalty cash promotion.

As usual Waitrose benefited from shoppers trading up at Christmas, growing sales by 1.5% and taking share back up to 5.2%. The Co-operative also won share at Christmas for the first time since the Somerfield acquisition – its sales growth of 1.4% was enough for it to secure 6.0% of the market. 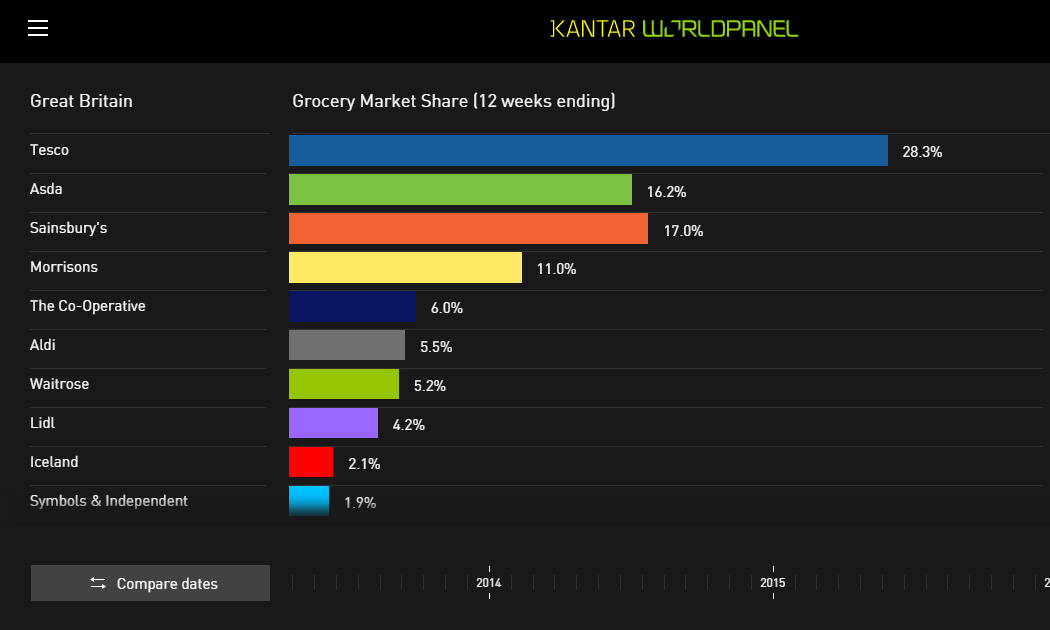