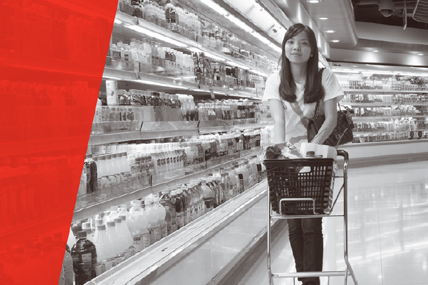 For the fourth consecutive year, Kantar Worldpanel partnered with Bain & Company to study the shopping behaviors of 40,000 Chinese households. The findings, published in a new report, Winning Over Shoppers in China’s ‘New Normal’, show a continued deceleration in overall market growth for fast-moving consumer goods (FMCG) categories – from nearly 12 percent in 2011-2012 to 4.4 percent during the first quarter of 2015. However, this deceleration was not uniform across the entire spectrum of FMCG categories; skin care, for example, rebounded in the last part of 2014 and early this year.

“Consumers’ shifting shopping habits, the expansion of online channels and pricing dynamics have put the brakes on FMCG company growth in China once again,” said Jason Yu, China General Manager of Kantar Worldpanel. “These trends are forcing brands to quickly understand the changes in the market and successfully adapt to the ‘new normal’ they face.”

According to Kantar Worldpanel and Bain’s research of 26 FMCG categories spanning the four largest consumer goods sectors – personal care, home care, beverages, and packaged food – volume, not price, is largely responsible for the slow-down. Growth in spending per household remains much lower than China’s disposable income growth rate, which is reflected in total FMCG volume – flat at about 0.1 percent in 2014 compared with 2013.

On the positive side, price levels recovered in 2014 after a drop the previous year, mainly due to higher average selling prices in the beverage and personal care sectors. Kantar Worldpanel and Bain found average prices rose by 5.4 percent, more than twice the rate of inflation. Yet, the research also reveals diverging rates of price growth, with premiumizing categories (those related to health and improving the consumer’s quality of life) experiencing growth over and above China’s 2.5 percent inflation rate. Meanwhile, commoditizing categories (such as soft drinks and fabric softener) experienced price growth lower than the inflation rate. 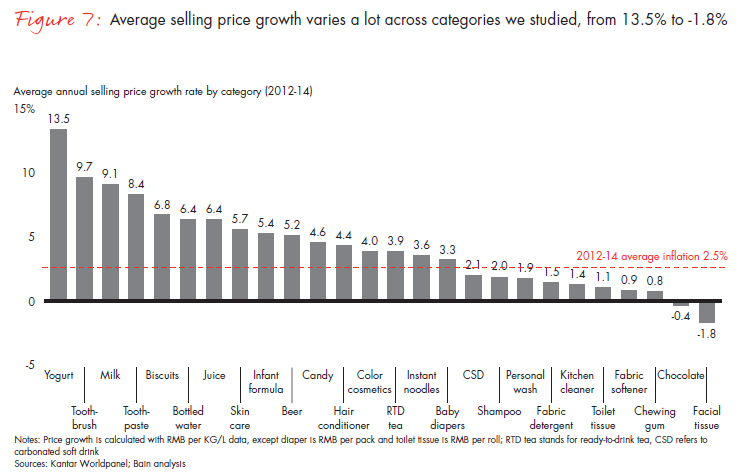 “It’s a different game for FMCG brands in China,” said Bruno Lannes, partner in Bain’s Greater China Consumer Products Practice and co-author of the report. “Without the advantages of volume growth or premium pricing, FMCG companies are seeking new ways to compete, such as offering more promotions, reviving ‘hero’ SKUs, or better managing their cost base.”

The research shows that the deceleration in China’s FMCG market varies across sales channels. Hypermarkets’ growth rate slowed by half, from 7.9 percent in 2013 to 3.7 percent in 2014 due to declining traffic. Traffic for smaller format supermarkets, mini-marts and convenience stories remained relatively stable. However, e-commerce continues to reign supreme in China, which is the largest digital retail market in the world. Online sales now represent 3.3 percent of all FMCG goods sold with sales growing by 34 percent last year. Chinese consumers are also rapidly making the leap to mobile retail. The research found that 80 percent of Chinese consumers who bought online in 2013 made at least one purchase from a smartphone. 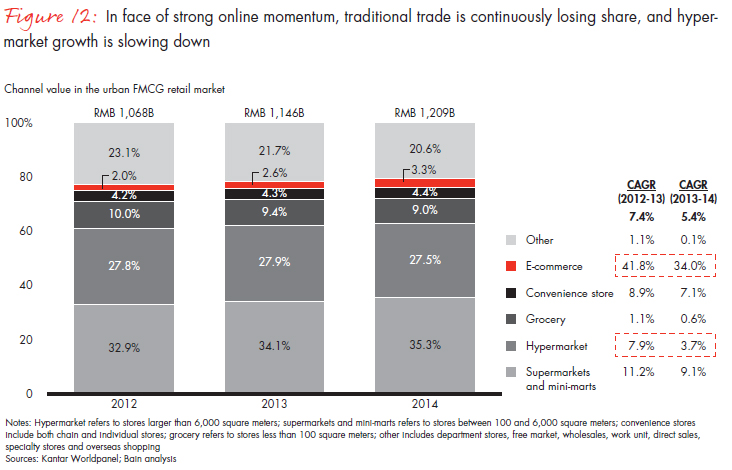 Kantar Worldpanel and Bain also noticed an interesting e-commerce trend in the research: the average selling price for FMCG products declines as online shoppers expand their purchases from relatively high-priced categories – such as beauty and baby products – to categories with lower average selling prices. Despite this pattern, the average price point online remains significantly higher than in modern trade, reflecting a very different mix of purchases online and offline. 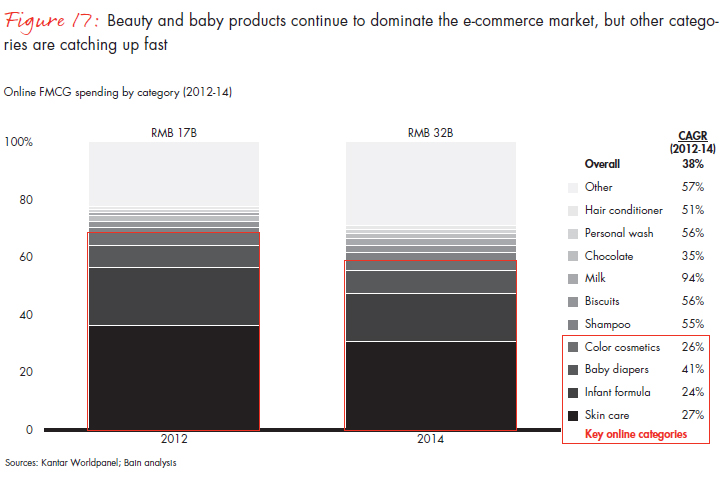 In China’s lower tier cities, the impact of the slow-down was minimal due to increasingly healthier sales growth – 8 percent vs. 2 percent in Tier 1 and Tier 2 cities – which accelerates Chinese FMCG companies gaining share over foreign competitors, said Yu. Last year, on an aggregate basis, local brands gained share in 18 of the 26 categories in Kantar Worldpanel and Bain’s study and grew on average by 10 percent. They now account for approximately 70 percent of the market value of these 26 categories. Meanwhile, foreign brands, also on an aggregate basis, gained share in only eight categories and grew by a mere 3 percent, losing share for the third year in a row. 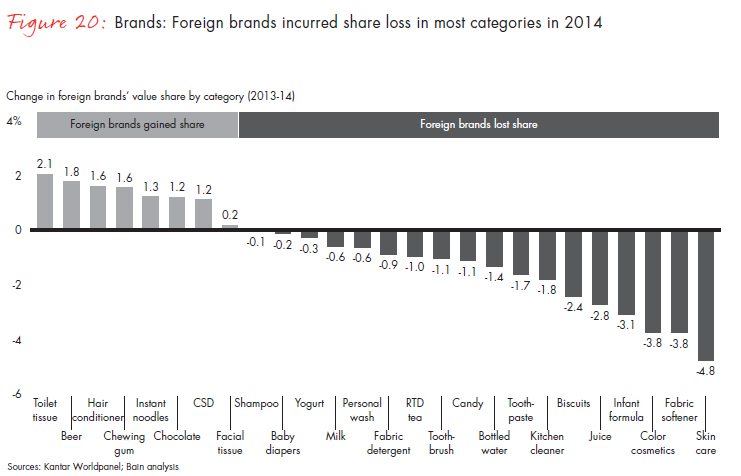 Despite a tougher competitive environment, China’s shoppers do display predictable purchase habits, which Kantar Worldpanel and Bain have discussed in previous reports. Companies can outperform their rivals by understanding these patterns and focusing on the following:

• As higher-tier cities mature, target shoppers in faster-growth, lower-tier cities who are still developing their aspirations for quality products.

• Clearly understand your category dynamics. If your category lends itself to premiumization, consider creating an appropriate product portfolio or investing in innovation to allow a price premium. In commoditizing categories, make efficient use of targeted promotions to add value and encourage new shoppers.

• Invest to understand how to use China’s booming e-commerce market to reach and recruit new customers to boost penetration. Prioritizing a digital strategy and even considering a full digital transformation is necessary as consumers and competitors are going digital.

• Make the most of the growth in supermarkets, mini-marts and convenience stores by adapting product offerings to these smaller store formats and shopping occasions.

All of these opportunities should be executed with an overall focus on driving household penetration, which is the primary way to gain market share and build big brands in China. Kantar Worldpanel and Bain have previously defined penetration as “the percentage of households in a market buying a particular brand at least once in a given year.”

“Consumer behavior and new market trends have led FMCG companies, both foreign and local, to take a hard look at their cost structures and their operating models,” said Lannes. “Cost-savings and faster decision-making and execution will enable additional investments that are necessary to make the shopper’s decision to purchase your brand an easy one.”