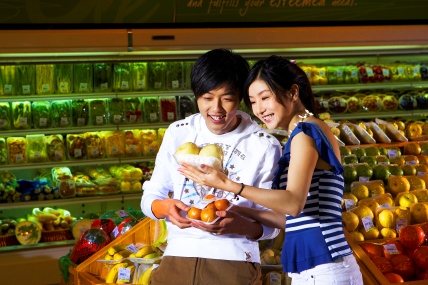 Kantar Worldpanel, the global market leader in consumer panels, reports 5.7% value growth for the FMCG (Fast Moving Consumer Goods) market for the latest 52 weeks up to Sep 5th 2014. While in comparison to historic levels this remains low, in the latest quarter (Q3 2014), FMCG growth recovered to 6.9%, higher than both Q2 (4.7%) and Q1 (4.6%) - a promising rebound in the second half of the year.

Counties, small less developed cities, maintained their growth momentum at 9.7% for 2014 Q3, while Key cities returned to positive value growth at 1.6%. Consumer trading up to more premium products is the key reason for this rebound. While this trend is present across all city tiers, it’s most noticeable in county level cities. 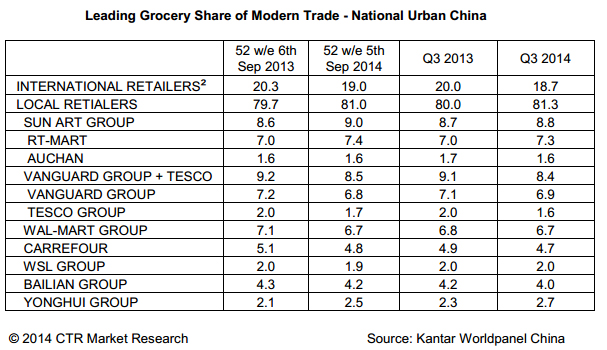 If Vanguard can successfully re-brand all current Tesco stores, it will become the biggest individual banner with 8.4% value share (Q3 2014), compared to the 7.3% of the current market leader RT-Mart. However, both Vanguard group and Tesco lost share in the latest quarter, especially in the Tesco stronghold of the east where its Q3 share dropped from 4.1% to 3.4% over the last year. Retailers competing in the east face challenging circumstances with the region showing the highest level of consolidation. The top 10 retailers combined share accounts for 63.1% of modern trade in comparison to the nationwide top 10 share of 41.2%.

Yonghui continued its strong performance with its national value share growing from 2.3% to 2.7% over the past 3 months. This was primarily driven by its fast expansion in the north, with a 0.6% share increase in Q3. Yonghui also demonstrated an impressive value share level of 5.4% in the west region; already making it the third largest player and only marginal lower than the second player, Vanguard group with 5.5%.

Steady penetration growth remains the driving force for e-commerce in FMCG, as the channel attracts more shoppers as a result of price, product choice and convenience. Kantar Worldpanel reports that 34% of Chinese urban families now shop online in the year. With the historical debut of Alibaba in NYSE in September, it is expected that more investment will be made on building infrastructure of the logistic network to make e-commerce more accessible to consumers across all life stages and locations in China.

E-commerce today is clearly no longer a preserve for younger consumers. Kantar Worldpanel observed that online shopping penetration is now growing strongly amongst older families where 26% shopped online in the latest year – an increase of 49% compared to 2 years ago. According to Kantar Worldpanel, older consumers tend to buy more; household cleaning products, liquid milk, nutrient supplement, kitchen products and pet food from e-commerce retailers. Online retailers will need to ensure that user interfaces are friendly and easy to navigate with suitable support and assurance for those consumers who move from offline channels to online channels. At the same time, brand owners should also embrace the new reality, learning to communicate with consumers throughout the path to online purchase.