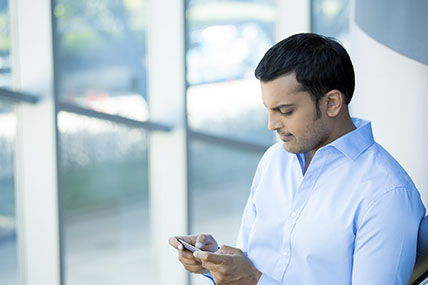 As the world smartphone market has become saturated and innovation has slowed, vendors have increasingly looked to other means to promote sales and maintain profits. One popular strategy has been to introduce new products and experiences – such as new tablets, smartwatches, virtual reality, accessories, music, and video services.

Another technique is to dive deeper into developing markets. Across the US, China, and EU5, smartphone sales have surpassed 90% of the potential market. Even in Latin America – specifically Brazil and Mexico, smartphone sales also exceed 80%.

With a population of 1.3 billion people and the second-largest mobile market after China, India is the next major focal point for smartphone vendors from around the world.

In Q1 2017, smartphone penetration in India reached 48% a growth rate of 16% vs. the prior year. Rapidly expanding 4G infrastructure and low-cost 4G data services introduced by India telecom leader Reliance Jio have led to increased competition in India and stimulated higher demand for 4G-capable devices. The push towards digital currency, which promotes a potent new use case for smartphones, is also expected to accelerate sales.

Chinese vendors have increased their smartphone sales share in India from 27% in Q1 2016 to 50% in Q1 2017. Xiaomi, Oppo, Vivo, and Lenovo have made significant investments in India in an effort to disrupt the local vendors, and out-maneuver South Korean giant Samsung, which continues to rank as the largest smartphone supplier in India with 27% of smartphone sales in Q1 2017, a dip from 30% the same period a year earlier.

Xiaomi and BBK (Vivo) are currently tied for second place in India at 12% of sales each, followed by Lenovo (including Moto) at 11%, and Oppo at 10%. Local brand Micromax has declined to just 5% of total sales, taking it from the second largest manufacturer last year down to sixth. Local brands Micromax, Intex, Lyf, and others now capture only 12% of India smartphone sales.

Apple accounted for 3% of sales in the most recent period but has recently made several strategic moves in India, including teaming up with Reliance Jio to offer free 4G service for one year to purchasers of iPhone 7 and iPhone 7 Plus. Apple is also planning to manufacture iPhones in India in the near future to deflect some of the high import taxes that make iPhones inaccessible to many Indian buyers.

Among the reasons that people purchase a particular smartphone – 4G capability spiked in Q4 2016 following the launch of Reliance Jio’s 4G network, with 31% of consumers citing that as a decisive purchase driver. However, quality of the camera and battery life remain the top motivators. Getting a good price was important to 32% of consumers, who cited that as their top purchase influencer. Recommendation by someone else rose to 35%, suggesting that price is no longer the most important concern.

Importantly, 31% of consumers have also reported visiting a retail store before purchasing a device, an increase from 26% over the past year, and perhaps the reason Xiaomi has announced that it is now beginning to open retail stores in India.

Over the next 12 months, 51% of current mobile phone owners in India say they intend to upgrade their devices. For current smartphone owners, that number is 52%. Samsung is the top brand preferred in India at 26%, followed by Apple at 15%. Between 7% and 8% of consumers intend to purchase Vivo or Oppo products.

All of this bodes well for Apple, especially if it can begin to manufacture iPhones in India in the coming months. As witnessed in China, in-store presence has been the driving force behind Oppo and Vivo’s successes, a strategy that is also working to their advantage in India. 68% of smartphones sold are currently purchased in brick-and-mortar stores vs. 21% online. While many consumers in India don’t initially consider Oppo and Vivo they pick up share because of their strong in-store presence.

While price alone may be becoming less significant as the primary influencer of what smartphone model is purchased, two-thirds of the market continues to spend less than $180 on a smartphone. There has been sales growth for smartphones costing between $180 and $300, driven by Chinese vendors Xiaomi, Oppo and Vivo.

Purchases over $300 remain a small fraction of the market, but this is where Apple and Samsung dominate, as they do in more developed markets. For Apple and Samsung, growth opportunities in India may not be immediate, but over the next few years we believe that consumers will become more engaged in services, 4G infrastructure will be stronger, and by all predictions – people will want more premium phones.