The latest grocery share figures from Kantar Worldpanel, published today for the 12 weeks ending 22 May 2016, show the market to be essentially flat, posting value growth of just 0.1%. With food price deflation remaining at 1.5% this period this is a positive performance for the overall market, though the major retailers are continuing to see sales decline across the board.

Edward Garner, director at Kantar Worldpanel, comments: “While the big four are struggling to keep their market share what’s clear is that consumers aren’t flocking away from their stores – their combined shopper numbers have dropped only 0.2% in the latest 12 weeks. In fact, 94% of Aldi and Lidl shoppers still visit at least one of the four major retailers every four weeks. However, consumers’ spend is increasingly being shared with other growing outlets which also include Waitrose, the Co-operative and Iceland and average household spend for the big four has dropped by 2.9%.”

The big four continue to be under pressure with sales declining at each retailer this period. Tesco saw signs of stabilising in comparison to historic declines over the past two years, showing the smallest drop in sales of 1.0%.

Edward Garner continues: “Sainsbury’s 1.2% sales decline – which has led to a drop in its market share to 16.2% – has been driven by a decline in pack sales, which is the short-term result of shifting its promotional emphasis from multi-pack deals to straightforward price cuts. Asda’s low-price positioning continues to feel the targeted effect of Aldi and Lidl’s growth – sales fell 5.1% on last year giving it a 15.8% share of the market, while Morrisons continues to be affected by store disposals.” 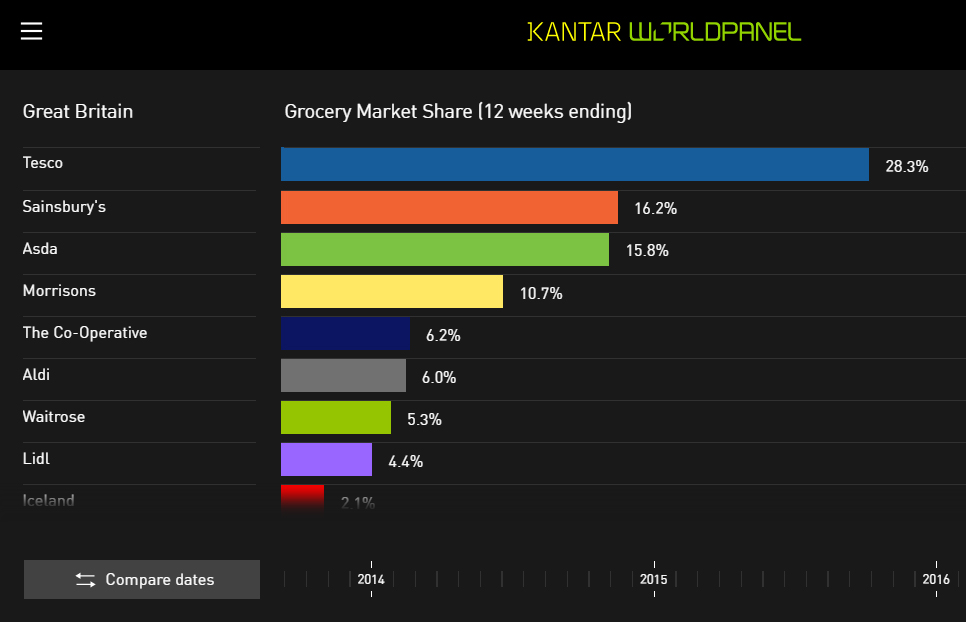 Waitrose has achieved a record share of the grocery market of 5.3%, growing sales by 2.1%. The Co-operative has continued its recent strong run, posting sales growth of 3.3% for the second period in a row to achieve a market share of 6.3%.

Lidl and Aldi remain the fastest growing retailers – up 14.2% and 11.4% respectively. This is not just about low prices – coupled with Waitrose’s strong performance this period the discounters are contributing to premiumisation. Aldi’s premium own label Specially Selected has grown by 15% while Lidl’s Deluxe range has grown by an impressive 65%.