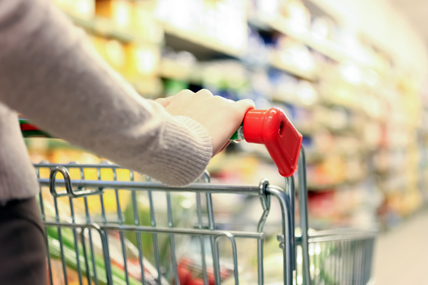 The Spanish FMCG market has grown in value during the last year (+1,8%) due to increasing prices.

The Spanish FMCG sector will remain steady in terms of volume in 2016, following on from the trend of 2015, according to the report ‘Balance and Perspectives for FMCG in 2016’ from Kantar Worldpanel. The market, however, has grown in value during the last year (+1,8%). This is as a result of increasing prices for FMCG experienced during the last months of 2015.

“FMCG is a complex and sensitive market for several reasons. But, as long as no surprises are revealed during the coming months, we can expect a steady year for the sector. A fact majorly linked to the stagnation of the population and the shift, that is already evident, in Spaniards’ shopping habits”, says César Valencoso, Consumer Insights Director at Kantar Worldpanel.

The report summarises the main trends that both consumers and the industry have experienced in the last year and those which will determine its evolution in the mid-term. Among the trends is, a more optimistic and open-to-change consumer, the continuing war in Fresh Produce that is being waged by large retailers, and an Europeanization of the Spanish habits in the kitchen and at the table.

A shift in the consumer mindset

The Spanish consumer has started to assume that the economic crisis is over. Their perception, which is equally as important as the actual impact on their pocket for the evolution of the sector, has improved considerably in recent months. 37.5% of households report they are spending more money in the supermarket than they originally planned to (+ 3.3% over 2014), with a further 25.2% claiming that the crisis has not affected their lifestyle and their spending (+ 6.3% from 2014). In addition, Spanish households are reducing some of their anti-crisis measures when making FMCG purchases: 3.4% less households do not spend time considering whether to spend extra (67.4 % of households do this), and the proportion of them that avoid buying certain brands because of their price has also decreased (40.6% in 2015 from 42.5% in 2014). 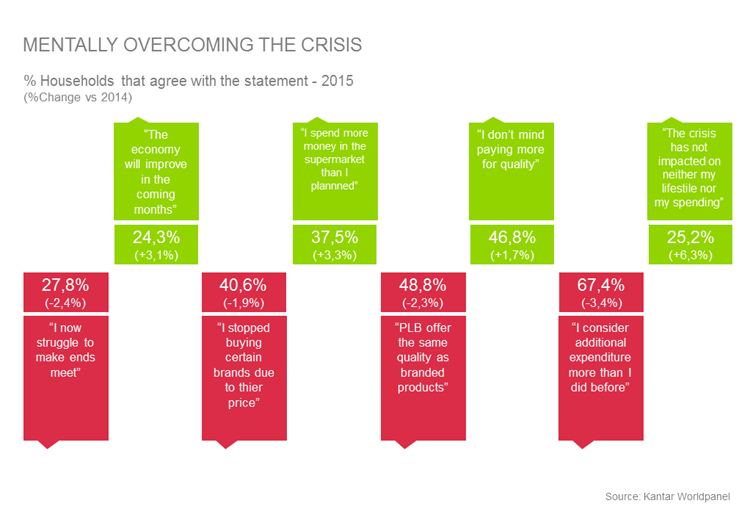 These changes in attitude and behavior will encourage Spanish consumers to go out more and spend more away from home, to be more demanding on the products they buy and the establishments they visit, as well as relaxing their purchasing discipline.

Trends in the retailer landscape

2015 has been confirmed as a good year for large retailers in the country. Dia Group and Lidl have been the most dynamic, with both increasing market share by 0.4 points. For Dia Group, its market share has increased thanks to the acquisition of stores and as a result of opening of new ones for Lidl. Their market share is now 8.6% and 3.6% respectively in 2015. Mercadona has strengthened its market-leading position by 0.2 points (22.7%) and Carrefour has slightly increased its share of the market to 8.5%. In 2015, Auchan Group maintained a presence of 3.8% and Eroski declined two tenths, to 6.2%. 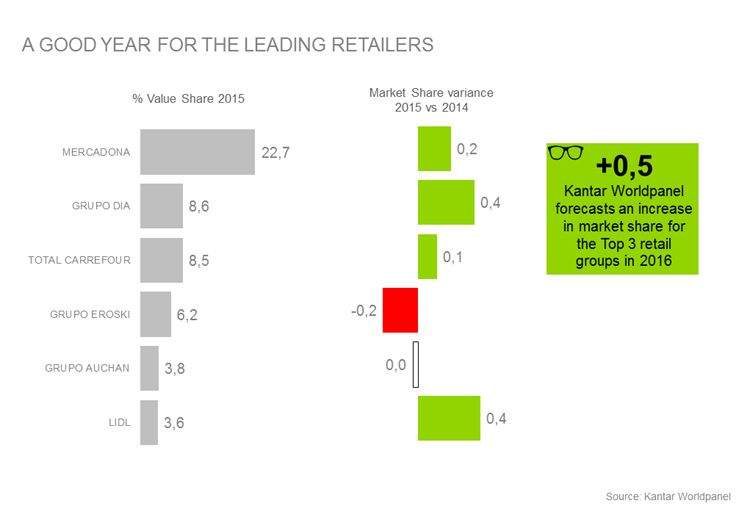 The development of ecommerce, the battle to win in the fresh section and the decision to support – or not – the retailer’s own brand will continue to be crucial during the coming months. Private Label has remained, for third year in a row, around 33.9% of the market share and this is where it will be moving during 2016.

Changes in the kitchen and at the table

Regardless of the economic situation, the report notes underlying trends that have been present in the Spanish society for some years and are now increasingly evident. 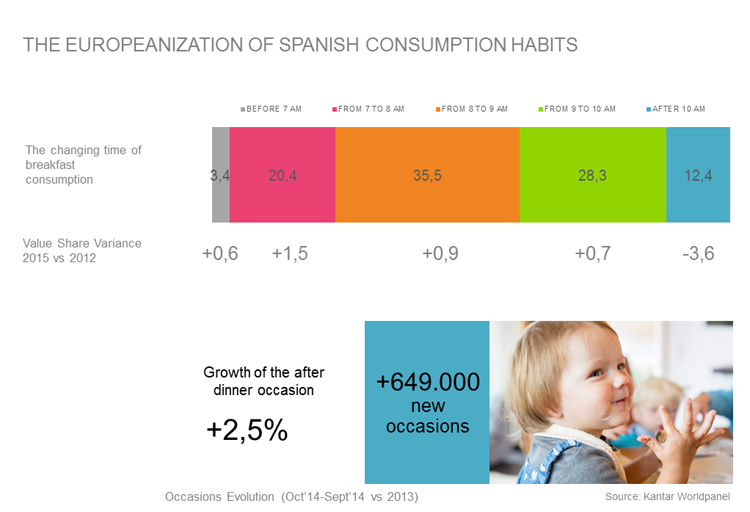 For example, Spaniards have increasingly been eating breakfast earlier, and that affects not only the type of products they eat, but also forces them to advance the other meals, therefore generating a new consumption occasion after dinner. Their interest in foreign food has also increased and healthier ways of cooking, such as grilling or boiling, are becoming more popular.