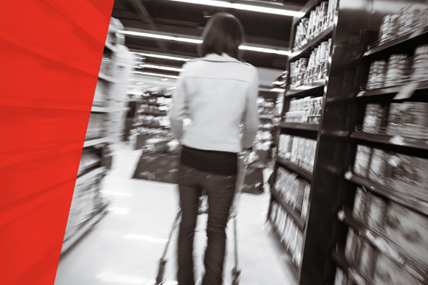 Value growth for fast-moving consumer goods (FMCG) in China reached a five-year low of 3.5 percent in 2015, but the fifth annual China shopper report from Kantar Worldpanel and Bain & Company, Dealing with Two-speed China, suggests that figure disguises an important distinction. Despite the general malaise, some categories are making significant headway, highlighting how the performance of FMCG and other consumer sectors in China are operating at two distinct speeds: slow and fast.

“China’s economy is evolving to adapt to slower GDP growth, a shift in focus from manufacturing to services, and a push for innovation-led growth over investment-led growth,” said Jason Yu, general manager of Kantar Worldpanel China. “As we track the shopping behavior of Chinese consumers, we see the distinct effects that these and other major economic shifts are having on their consumption patterns.”

As in each of the past four years, Kantar Worldpanel and Bain conducted a deep analysis of the 26 categories that span the four largest consumer goods sectors: packaged food, beverages, personal care and home care, which combined represent 80 percent of all FMCG purchases. The report details how China’s two speeds are playing out across FMCG product categories, retail channels and the continuing battle between multinational and domestic brands.

The rise of the service sector in China and its higher paying jobs has helped boost growth among brands in premium categories, such as yogurt and pet food, as well as premium SKUs in most categories.

“FMCG companies have built vast distribution networks to introduce their products to Chinese consumers. With those networks now in place, brands face a new challenge: increasing the rate of sales at each distribution point,” said Bruno Lannes, partner in Bain’s Greater China Consumer Products Practice and co-author of the report. “As driving frequency is hard to do and is low in many categories in China, brands often invest to offer premium products, which is proved to be a successful approach for squeezing growth when penetration plateaus or declines.” 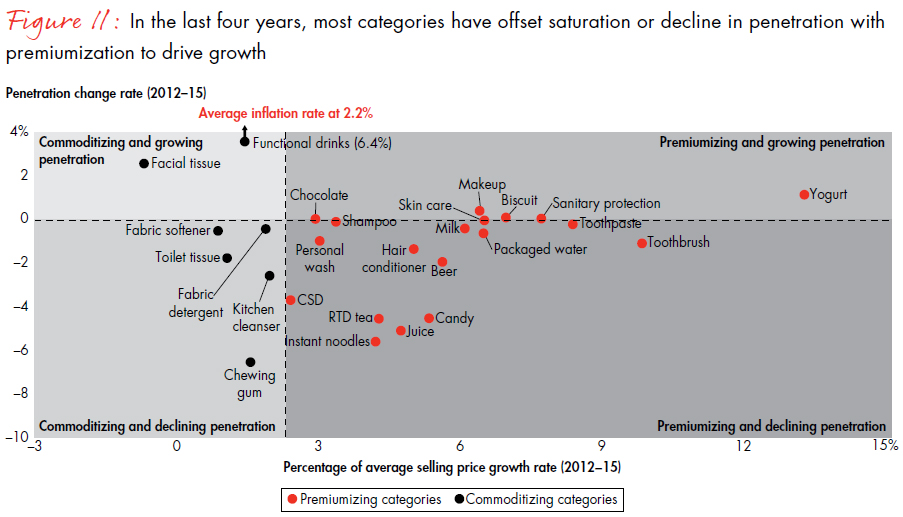 Meanwhile, brands in categories that traditionally cater to blue-collar workers, such as instant noodles and value beer, are suffering as many manufacturing jobs move to lower-cost countries. In 2015, the volume of instant noodles declined by 12.5 percent; beer by 3.6 percent. This slow growth is intensified by a decline in China’s overall worker population, which peaked in 2012, resulting in more low-income retirees.

However, it is online shopping that continues to define the modern retail environment in China. Over the last four years, the country’s e-commerce marketplace has grown at an annual rate of approximately 37 percent and generated revenues of nearly RMB 4 trillion, making China the world’s largest e-commerce market. Kantar Worldpanel and Bain’s research found that baby-related categories and skin care continued to dominate the e-commerce market, while chewing gum, fabric softener and most beverage categories achieved a low online penetration rate. Most personal care, home care and package food categories turned in a middle level of penetration but high rates of growth. 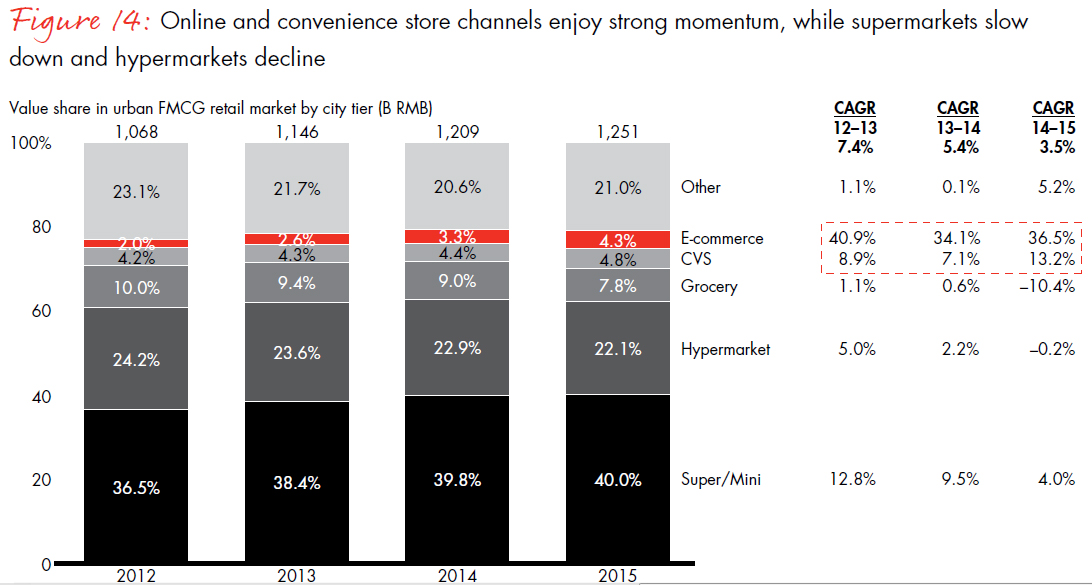 Conversely, hypermarkets, which redefined China’s retailing environment over the past decade, registered their first-ever drop in 2015, losing 0.2 percent value in the urban FMCG market as traffic dropped by 4.6 percent and volume per household sank by 4.7 percent. Super/mini stores didn’t fare much better; growth plummeted from 9.5 percent to 4 percent last year.

China’s two-speed consumer market is evident in the continuing battle between foreign and local brands. In 2015, local companies continued to gain share over their foreign rivals on an aggregate basis. Local companies grew by nearly 8 percent in the categories Kantar Worldpanel and Bain studied, contributing to a 109 percent share of market growth. These companies made the biggest advances in skin care, baby diapers, hair conditioners, toothpaste and shampoo. 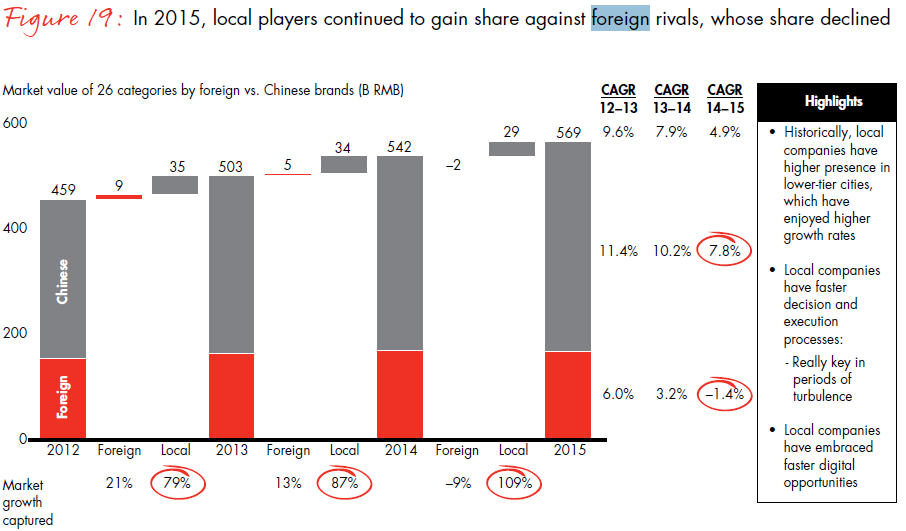 Foreign companies generated the greatest share increase in fabric softener, infant formula, instant noodles and beer, gaining ground either through heavy marketing investments or as the result of food-safety concerns with local products. However, foreign brand still declined by 1.4 percent in 2015.

Last year also marked a significant shift in geographic growth. Until now, a city’s tier was a major factor in the velocity of value growth. Now, growth across all city tiers is moving towards the 3-5 percent range. This means brands can’t assume higher growth rates in lower tier cities.

Even in China’s two-speed scenario, Kantar Worldpanel and Bain found that shoppers display predictable purchase patterns, and brands can outperform rivals by identifying those patterns. According to the report, there are four steps companies and brands can take to win in this market:

• Review their cost structure and operating model to increase agility and speed in decision making and execution. Above all, embrace the ways that digital is disrupting their categories;

• Develop digital capabilities and mindsets specifically within their marketing and sales teams as well as more broadly throughout all functions;

• Adapt their route to market (RTM) model, according to the dramatic retail changes and deterioration of distributors’ economics caused by the overall market slowdown and online competition. Focus on winning channels while investing selectively in others; and

• Continue their efforts to boost penetration as the key to creating large brands, relying on digital activation as required in addition to in-store activation.