The latest supermarket share figures from Kantar Worldpanel in Ireland, published today for the 12 weeks ending 28 February, show that the strong start to 2016 has continued for the supermarket sector. Shopper spend has increased by 3.6% over the past 12 weeks, making this the third successive period where growth has been above 3% for the Irish grocery market.

David Berry, director at Kantar Worldpanel, explains: “Over the past twelve months we have seen a gradual increase in the level of price inflation, increasing from slight deflation of -0.1% in March 2015 to inflation of 2.6% in the past 12 weeks. Interestingly shoppers don’t seem deterred by rising prices, increasing their spending well ahead of the rate of inflation.

“There are signs that the Irish public may be sticking to their new year’s resolutions, with healthy foods performing well ahead of the market. Sales of fresh fish increased by 13% in the past 12 weeks, while fruit saw an 11% boost and sales of nuts have increased by 17% compared with last year. However, we’re still looking to treat ourselves too – sales of chocolate confectionary were up 14% this quarter, while ice cream saw a 13% sales increase compared to the same period last year.”

Among the major retailers, Dunnes’ recent run of success continues with sales 7% higher than last year – an increase of almost €3 million per week across the quarter. Bigger baskets remain the primary driver of growth for Dunnes, with the average shopping trip now coming to €37.60, almost €2.50 higher than last year.”

Meanwhile SuperValu has grown slightly ahead of the market, increasing sales by 3.7%. This has boosted the retailer’s market share to 25.0%, reaffirming its position as the number one supermarket in Ireland.”

Tesco remains in second place, capturing 24.2% of grocery spend and increasing sales by 0.6% year on year. This is the third successive period of growth for Tesco and has been driven by more frequent visits – each shopper visited the retailer 14 times on average over the past quarter compared with 13 visits last year.

David Berry continues: “Elsewhere, Lidl’s double digit growth continues, improving their market share by half a percentage point. Over 66% of Irish households shopped in a Lidl store in the past 12 weeks, compared with less than 60% five years ago. Aldi’s growth is more modest but remains impressive, with larger shopping trips increasing sales by 3.0%.” 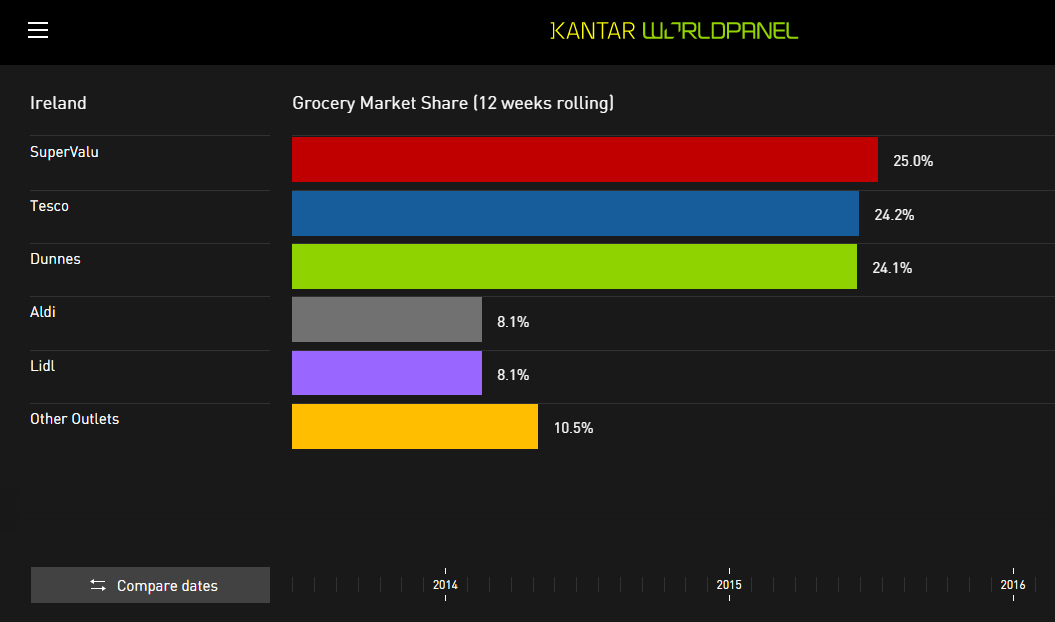