The latest grocery share figures from Kantar Worldpanel, published today for the 12 weeks ending 27 March 2016, show the fastest growth the sector has seen all year. Supermarket sales have grown by 1.1% compared with the same period last year.

Fraser McKevitt, head of retail and consumer insight at Kantar Worldpanel, comments: “An early Easter gave the market a sales boost of £152 million compared to last year, adding 0.6% to the overall growth rate. Britain’s love of all things sweet was in evidence, with 63% of households buying at least one chocolate egg during March, spending an average of £12 over the month. Over half of the population bought hot cross buns, while 15% purchased a fresh leg of lamb for their Easter celebrations.”

The Co-operative saw sales increase by 3.9% – its fastest growth since the Somerfield acquisition in 2011 – increasing its market share by 0.1 percentage points to 6.1%. Heeding the retailer’s call for a ‘little and often’ approach to shopping, consumers have been visiting The Co-operative’s stores more frequently, especially for fresh food and own label products. Many of its shops remained open on Easter Sunday, providing an additional opportunity to shop when many larger supermarkets were closed.

Sainsbury’s February announcement that it is scaling back multi-buy promotions hasn’t dampened performance at the retailer, which continued to lead the big four with a sales increase of 1.2%. Spend on deals in Sainsbury’s which require consumers to buy two or more items together fell by 73%, with shoppers instead purchasing a price-cut promotion or paying full price.

Shoppers continue to benefit from falling grocery prices, with like-for-like prices 1.5% lower than this time last year. Fraser McKevitt continues: “While saving money on the basics, consumers are not averse to treating themselves. Premium own label sales grew by 6.6% in the past 12 weeks, well ahead of the overall grocery market. Aldi and Lidl are leading the way, growing their premium lines more than twice as quickly as the rest of their ranges, but we’ve seen this across the retail spectrum – from Morrisons and The Co-operative to the likes of Waitrose, whose forthcoming launch of Waitrose 1 is the latest attempt by a traditional grocer to reclaim sales from the discounters.”

For the fourth month in a row Tesco’s decline lessened, with sales now down by only -0.2% year-on-year. Fraser McKevitt continues: “A small increase in shopper numbers suggests Tesco could return to growth in the next few months; welcome news after 12 months in decline. Partly hindered by previously announced store closures, Tesco’s market share fell by 0.3 percentage points to 28.1%.
“Also feeling the impact of operating fewer shops, Morrisons saw sales fall by 2.4%, an improvement on last month, while its market share decreased by 0.4 percentage points to 10.5%.”

Elsewhere Lidl retained their place as the fastest growing supermarket, increasing sales by 17.7% to capture 4.4% of the market, while Aldi grew sales by 14.4% to reach a new record-high market share of 6.0%. 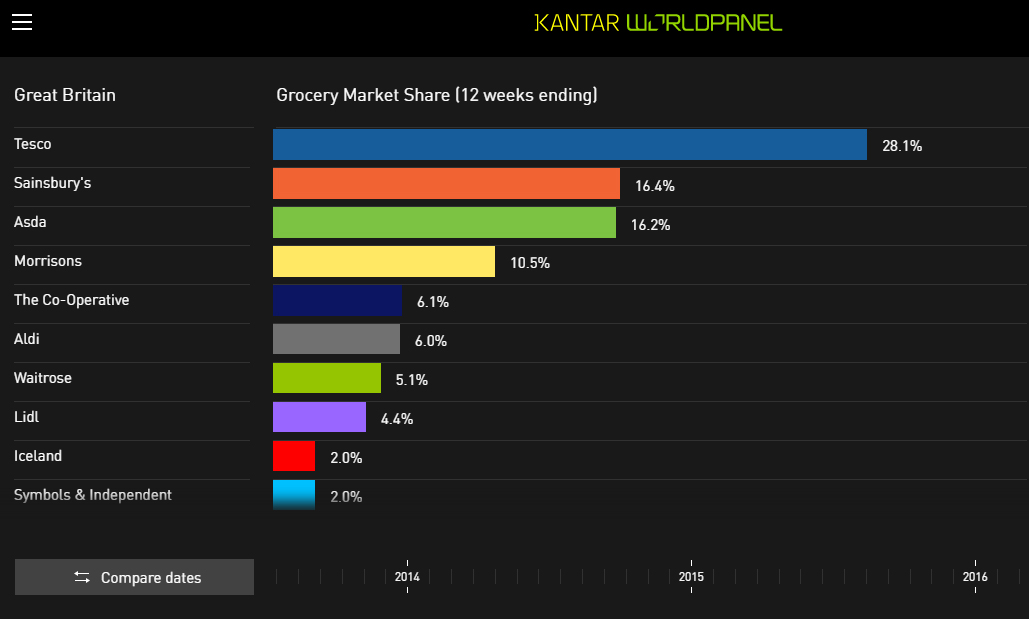 Grocery inflation now stands at -1.5%* for the 12 week period ending 27 March 2016. This means shoppers are now paying less for a representative basket of groceries than they did in 2015. This is the 20th consecutive period of grocery price deflation. Falling prices reflect the impact of Aldi and Lidl and the market’s competitive response, as well as deflation in some major categories such as butter, fresh sausages and crisps.