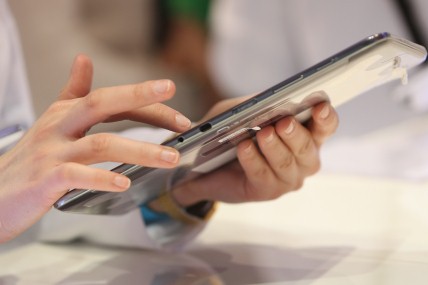 The latest smartphone sales data from Kantar Worldpanel ComTech, for the three months to June 2014, shows Android remains the leading OS across Europe* boasting a 74.0% share. Apple follows in second place with 15.3% of the market, while Windows’ share in Europe stands at 8.8%, up 1.9 percentage points.

Dominic Sunnebo, strategic insight director at Kantar Worldpanel ComTech, comments: “Android continued to grow its share across Europe in the second quarter of this year, thanks to smaller manufacturers such as Wiko, Huawei and Alcatel OneTouch pushing the platform. Samsung still remains the dominant manufacturer of Android handsets with a 44.1% share across the five largest European markets. Meanwhile, Apple’s share of the European market remains fairly static. Interestingly, in its largest EU market, Great Britain, sales of the iPhone 5c have surged to almost equal that of the iPhone 5s. The iPhone 5c continues to attract a different audience from the 5s, with its customers tending to be female, mid to late adopters and less affluent.”

When it comes to the US, it is still all about the big players. Samsung’s latest flagship device, the Samsung Galaxy S5, drew level with the Apple iPhone 5s in the race to be the top selling handset over the past quarter. It performed particularly well on Sprint and T-Mobile. The Galaxy S5’s large screen was a draw for 67% of its US consumers, as well as its 4G/LTE capability (57%) and strong battery life (54%).

Sunnebo continues: “In the USA, Samsung’s marketing power continues to play a key part in driving sales of the S5. Some 61% of Galaxy S5 buyers recall seeing TV ads relating to the handset while 40% remember seeing online advertisements. Its brand resonance, coupled with Samsung’s strength in stores are coming together to help it challenge Apple’s dominance. Some 64% of consumers that were recommended a brand in-store were recommended Samsung.

In urban China, Xiaomi continues to go from strength to strength, securing a 27% share of smartphone sales in the second quarter of 2014, compared with 21.1% for Samsung. Its budget Xiaomi RedMi model continues to attract customers to the brand.

Sunnebo comments: “Chinese consumers tend to switch brands far more often compared with other markets. The balance of power in the Chinese mobile sector can change incredibly quickly and the current momentum behind Xiaomi off the back of its latest product announcement, the Xiaomi Mi4, shows that the company’s success isn’t expected to slow down any time soon. Significant numbers of existing smartphone users are looking to switch to Xiaomi – some 8% of Apple customers, 12% of Samsung customers and 13% of Nokia customers are all actively planning to switch to Xiaomi when they upgrade. This number is even higher for local brands such as Huawei and ZTE reinforcing its standing as the one to beat.”

Check out our dataviz with all historic data