China FMCG recovers well in first half of 2021 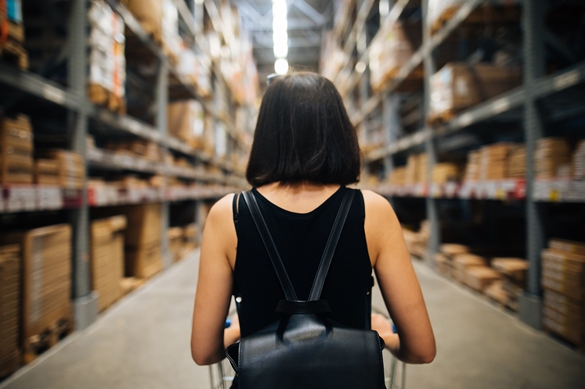 Fast Moving Consumer Goods (FMCG) sales in China grew by 5.8% in the first six months of 2021 compared to the same period of 2020, according to Kantar Worldpanel. Compared with the same period in 2019, the market reported a sales growth of 3.8%, indicating recovery is well underway. The South region and eCommerce channel continued to make major contributions to the overall growth. As the weather turns warmer, beverage and personal care sectors grew by 14.5% and 9.8% respectively year over year. China’s second quarter GDP grew by 7.9%, suggesting the country rebounded well from the disruption caused by the pandemic.

The out of home food & beverage categories increased by 15.1% in the second quarter compared to 2020 Q2. As travel restrictions eased, many consumers are now back to their normal day-to-day lives and the impact of this can be seen by the rapid recovery of the out-of-home market. Products sold through on premise channels reported surging sales, with ice-cream and beverage showing strong growth. 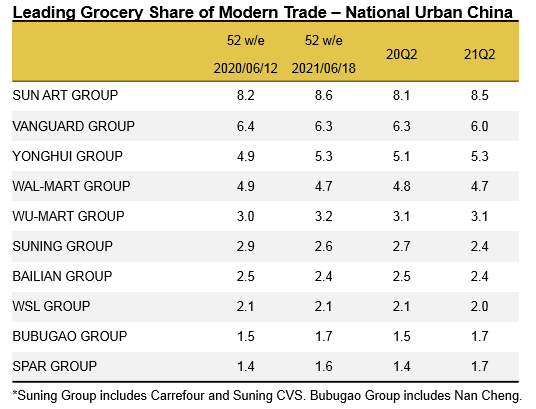 Among the major players, Sun Art Group maintained its leading position with a value share of 8.5%, up 0.3pt year on year. Sun Art Group has announced plans to develop more medium-sized stores this year in order to expand the density of store networks and improve accessibility. Yonghui grew its business by 0.2pt to 5.3% share of the total market. Over the last three months Yonghui opened more than 30 warehouse hypermarkets, featuring selected core SKUs and everyday low price to attract mainstream shoppers. The model is different from the newly emerging membership store launched by Costco, Hema X and Metro Plus which are targeting to win the loyal middle-class shoppers with exclusive product offers and a full range of services and experiences. As big-format stores continue to face strong competition from eCommerce and emerging retail business models, such as Community Group Buy, the return to selected but quality product offers is a sign of how offline stores can maximize their value proposition to key shopper groups.

Regional retailers continued to make notable gains in Q2. Both Bubugao and SPAR grabbed 1.7% share of the total market. Bubugao expanded its market in the South and West, up 0.3pt of total national level. While SPAR mainly grew in the North, increasing its national share by 0.2pt year-on-year. Jiajiayue, a member of the SPAR family, started expanding its presence outside Shandong province and in the meantime invested in their supply chain in nearby Northern provinces to empower more regional players.

Online to Offline (O2O) is here to stay

Despite most consumers returning to their normal life, the shopping preference of ordering online from an offline store and receiving at home or office remained. Sales through O2O channels have continued to grow accordingly and in the first half of this year, nearly 50% of Chinese urban families have purchased FMCG through O2O platforms. Major retailers and ecommerce companies are striving to develop their O2O business, many of whom have also thrived during the ‘618’ Shopper Festival originally held by pure play eCommerce players. Online sales of Yonghui exceeded 250 million during the "618" festival, and its order volume exceeded 3 million, which is double the previous year’s amount. Carrefour's O2O business and its mini-program orders also doubled during the "618" period.

E-Commerce continues to gain in the battlefield

Online shopping channels maintained an increasing trend with 10.6% year-on-year uplift, yet seeing a slowdown compared to the first quarter of 33.2%. The number of ecommerce shoppers is still growing, and consumers shop much more frequently than they did last year. By 2021 Q2, ecommerce holds a 28.4% share of the total FMCG market in China. There are more than 74% of Chinese urban households who purchased FMCG online during this quarter. 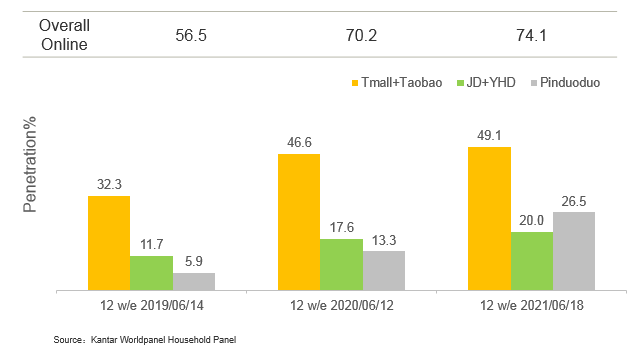 Alibaba Group is leading the market among the ecommerce platforms with its market share of 43.9%, up 0.4pt year on year. Around half of Chinese urban families shopped for FMCG on the platforms of Alibaba at least once in 2021 Q2. Pinduoduo maintains its remarkable performance with a year-on-year gain of 5.7pt market share, accounting for 9.3% of the ecommerce market. It is well noticed that the number of Pinduoduo’s users doubled within one year. Pinduoduo announced that they reached 800 million annual active users by the first quarter this year. In addition to traditional e-commerce, online shopping through live streaming on short video platforms has also developed rapidly. Nearly 10% of urban households made FMCG purchases on Douyin or Kuaishou in the first half of 2021, according to Kantar Worldpanel.