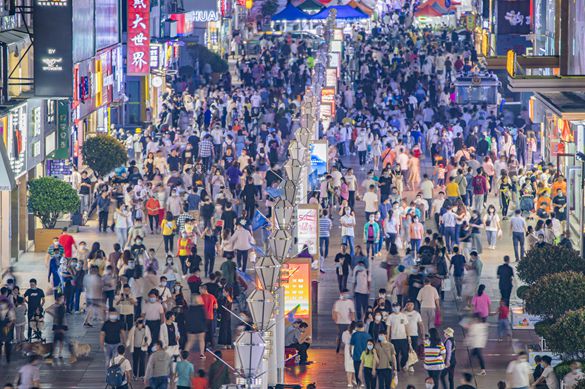 Non-food continued to be the growth engine, with home care products reporting strong growth of 7.1% in sales value. Food and beverage categories saw a mixed performance with packaged food’s growth slowing down in the recent quarter but dairy continued to do well. Modern trade (including hypermarkets, supermarkets, and convenience stores) continued to decline, falling by 2.9% in the latest 12 weeks compared with last year.  In contrast to the weak performance of hypermarkets, small/mini supermarkets continued their growth momentum by attracting more shoppers, recording a sales uplift of 6.3%.  E-commerce on the other hand continued its soaring trend with rapid value growth of 41.3% in Q3, reporting an even higher level of acceleration compared to last year. In Q3 2020, E-commerce accounted for 25.8% of total FMCG spending in China. 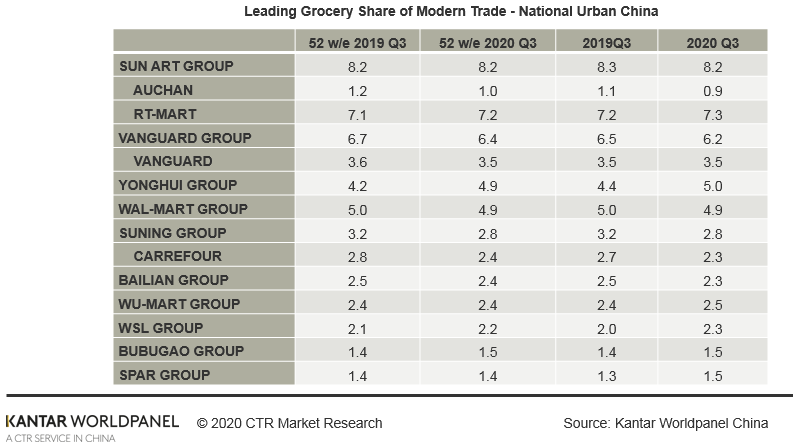 In the past 12 weeks major retailers reported a lukewarm performance.
Among the top players, Sun Art maintained its leading position thanks to RT-Mart’s performance, which recorded a market share of 7.3% (+0.1 ppts vs last year). RT-mart was able to drive shopping frequency by tapping into both O2O infrastructure and diverse store formats. Earlier this year, Sun Art Group planned to open 30 small-format community stores to meet the proximity needs in China.  Despite the huge challenges to big-format stores, the reformed RT-mart hypermarkets aims to attract younger consumers by providing ready-to-cook food and imported products, on the back of an efficient delivery service. Local hero Yonghui maintained a robust growth of 9.4% in Q3, achieving an historic market share high of 5.0%. Since March, Yonghui entered the battlefield of live-streaming which is now playing a more crucial role in conversations with shoppers.  Relying on its strong fresh food supply chain, Yonghui focuses more on showing consumers the sources of production and building a closer connection with consumers.

O2O continues to grow the market

In Q3 2020, 31% of Chinese urban households purchased through O2O platforms, lower than the level during the peak of the pandemic. However, in the post-Covid era, O2O traffic has been continuously growing, especially in northern cities and provincial capital cities, indicating that Chinese consumers are more accustomed to purchase via O2O. Categories such as CSD, packaged water and juice have led the O2O market traffic growth over the summer months. Among the top players, RT-mart, Wal-Mart and Yonghui contributed the most, while Vanguard and Wu-Mart (with Dmall) grew traffic. Kantar Worldpanel also observed that retailers with a higher contribution from O2O are more likely to have a stronger competitive advantage in their current shopping environment.

In the latest 12 weeks ending 11h September 2020, 72% of Chinese household bought FMCG online. In current months, lower tier cities enjoyed the fastest penetration growth caused by the strong performance of Alibaba group and Pinduoduo.
Alibaba continued to lead the market growth, with a significant penetration uplift of 13.4 ppts versus the same period last year. It worth noting that in the current months, Taobao has been accelerating its progress in attracting new buyers. Since this March, Taobao launched a special version to directly compete with value players, like Pinduoduo, while tapping into the strong manufacturing capacity in China.  On the other side, Pinduoduo sped up their recruitment of buyers. Its penetration reached 16.5% in Q2, up by 9.6 points vs last year, further narrowing the gap with JD.com. 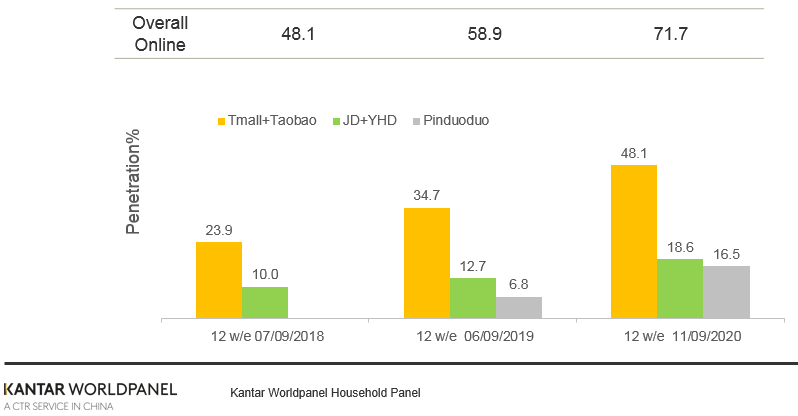