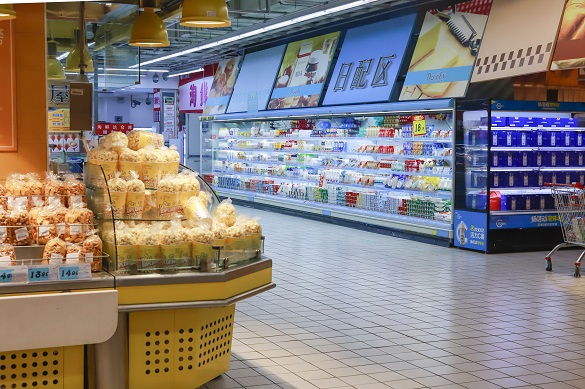 According to Kantar Worldpanel (a CTR service in China), sales in China's fast-moving consumer goods (FMCG) market in the first quarter of 2022 increased by 2.8% year-on-year, supported by the policy of “Growth Stabilization and Consumption Promotion”. However, offline consumption in March bore the brunt of the nation-wide market disturbances caused by transmission of the Omicron variant.

According to the National Bureau of Statistics the total retail sales of consumer goods witnessed a shrinkage of 3.5% in the last 4 weeks, driven by the impact of the surge in Omicron cases and the implementation of lockdown measures, but the FMCG market delivered a 1.6% growth in March. This illustrates that consumers tilted their basket weights towards FMCG goods given the uncertainties and challenges under COVID. Subsequently, packaged foods and beverages grew by 5.1% and 5.6% respectively year-on-year, household cleaning-related sales grew by 5.7%, while the personal care sector declined by 1.4%, driven by less demand for these products for households who are locked down.

This restriction shrunk the turnover in Hypermarkets and Large Supermarkets, leading to mild year-on-year decline by 2.7% and 0.2% respectively. In contract, Online shopping* kept its leading position through the first quarter increasing by 10% year-on-year, even if its growing pace had slowed to some extent.

Since 2020, suppressed by COVID transmission and challenged by newly-emerged digital platforms, retailers have been inclined to take a position of greater cautiousness in store and with their business development. Furthermore, the disparity in performance among retailers was more evident in the first quarter, especially when a new-round of COVID hit the more developed coastal China, planting new uncertainties in the growth expectation of retailers that are heavily based in the affected areas.

Although Sun Art and Vanguard have managed to maintain their leading positions, their market shares witnessed a substantial decline compared to the first quarter in the last year. Sun Art lost 1.3 percentage points of penetration. While closing some stores to narrow its deficit, RT-Mart doubled down on resigning 30 stores, a hypermarket transformation that would better fit the new retail fashion in China. In the meantime, Yonghui focused on its omni-channel strategy - “Based on Fresh, Centered on Client”, and won a growth of 6.5% in sales value and 0.3 percentage points in market share, successfully reversing its previous decline. Wal-mart delivered an even better increase by 8.3% for the first quarter and 14.3% for March only. This growing momentum would probably maintain in face of an elevated demand for stocking-up.

The Consistent Growth of Ecommerce Players

E-Commerce* kept its triumphant progress throughout the first 12 weeks. Compared with the last year, the sales value of eCommerce further grew by 10% with a 0.6-percentage point uplift in penetration. The consistent driving force was the increase in purchase frequency. Self-managed stores and a strong logistics capacity helped JD further acquire penetration by 1 percentage point against its rivals, which resulted in a year-on-year value growth by 9.7% for the first 12 weeks. With this 10% growth, JD managed to stabilize its market share while Alibaba and Pinduoduo had to face share losses, especially in March. It is not difficult to imagine the enormous challenges posed by the requirement of “Zero-COVID” and the underlying uncertainties embedded in local containment policies in logistics costs for eCommerce platforms. In others, a self-managed logistics network with better disinfectant measures may help secure the sales if the outbreak escalates further.

As for the short-video based platform, Douyin and Kuaishou continue to experience growth in shopper with 12.7% and 5.0% of consumers using Douyin and Kuaishou in the first 12 weeks to purchase FMCG products. Potential increases in working at home are likely to correlate with increased usage of Douyin and Kuaishou as consumers have more time and need for an interactive shopping experience. This not only nurtures the habit of “live shopping”, but also facilitates the development of related supply chains and logistics network, which makes the outlook for the rest of 2022 very positive for these platforms.

The New Retail Goes On

O2O kept climbing during the first quarter, but the growth substantially varies across city tiers. For the 4 key and Tier-A cities the first quarter provided a penetration boost by 7.8 and 7.7 percentage points respectively. Besides, the purchase frequency substantially increased as well, implying that O2O, ordering with an APP via a smartphone, can play a crucial role in stock-up requirements. Community Group Buy and Warehouse-based retailers also delivered eye-catching growths in sales value by 28% and 30% respectively, suggesting an ongoing consumer divergence that may underlie a further diversification of the retail channel structure. More penetration growths of community group buy occurred in the eastern and southern China, as a consequence of certain supply chain adjustments after the market reshuffle amongst eCommerce giants.