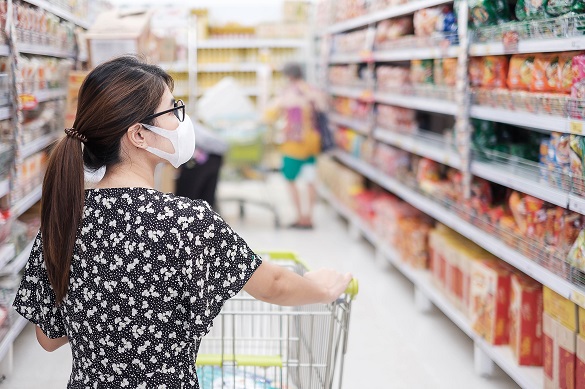 According to Kantar Worldpanel (a CTR service in China), sales in China's fast-moving consumer goods (FMCG) market in the second quarter of 2022 increased by 2.8% year-on-year, the same level as the first quarter.
COVID heavily reassigned the weight of each growth driver and reshaped the landscape of the outlook for FMCG. Food and homecare led the trend through Q2 by a growth of 9.5% and 5.7% respectively, while beverages slowed down with a mild growth of 1.2%. Since many consumers spent more time at home, due to several lockdowns across the country, personal care was the most impacted, declining by 4.4%.

Although total retail sales of consumer goods of the first half in 2022 mildly declined by 0.7%, compared to 2021, purchases on daily necessities increased, especially via ecommerce-based channels. As Shanghai and Beijing came out of the lockdown the FMCG market quickly recovered and reached a 5.2% year on year growth for the month of June. With productions and social activities restored, beverage and personal care categories regained their growth momentums.

Although June’s market rebounded significantly, lockdowns in Shanghai and Beijing incurred shockwaves that slowed down the growth across the East and North regions in Q2. Comparatively, the South and West regions earned an advantage and delivered greater a market value by 4.4% and 2.8% compared to last year, which is mostly attributed to higher purchase frequency. The divergence among channels was further amplified. Many CVS and Small/Mini Supermarkets were able to continue operations and meet the demand of convenience which led to a sales lift of 13.8% and 11.4% respectively, whereas hypermarkets bore the blunt of the lockdown experiencing a decline of 3.3%, which was an acceleration of the 0.7% decline seen in Q1.

Competition has been heating up for modern trade retailers since offline shopping has faced greater challenges resulting from of COVID. As hypermarket in the East staggered, Sun-Art lost 0.8 percentage points in market share, whereas Yonghui stepped up and took 0.1 percentage points. Due to its successful transition into the small supermarket format, Bravo Yonghui seized a 7.4% lift in value sales. This narrowed the gap further and shows that shopping habits have developed in the direction of faster, closer, and lighter occasions.

In the meantime, Sam’s club demonstrated that hypermarket can indeed compete against the small and mini supermarkets by leveraging its highly differentiated retail model. Sam’s club has helped the Wal-Mart group replace Vanguard as the third biggest retail group, and this momentum was mainly attributed to higher penetration and purchase frequency, suggesting that acquiring new customers plays a decisive role in omni-channel development.

SPAR group, which includes the Jiarong banner in Guangdong and the Jiajiayue banner in Shandong, backed up its growth by 0.3 percentage points and reached 2% market share, driven by substantial penetration increases. Guangdong Jiarong doubled down on the omni-channel development and raised its penetration by 0.4 percentage points in a single quarter. Shangdong Jiajiayue maintained steady along its growth path in Q2, with the help from the newly-developed discount store.

Among major ecommerce platforms, JD maintained its leading position in growth. With a lift by 0.8 percentage points in penetration, JD sealed a consistent growth for three consecutive months throughout the second quarter. JD’s market sales increased by 4.5% and market share by 0.2 percentage points in the Q2 as self-managed stores were able to alleviate the disturbances along the logistics chain. Meanwhile, Alibaba and Pinduoduo struggled to stabilize their market share with both platforms seeing a slight penetration decline in the second quarter compared to last year. With the help of popularity of short-video, Douyin and Kuaishou pumped up their consumer base by another 9.3 and 2.3 percentage points in Q2.

As the shopping pace was disturbed by the previous stock-up, brands and platforms wished to leverage this 618 to respond to the repressed demand resulting from the lockdown. Major platforms offered more promotions and shortened intervals between marketing points. However, due to the absence of top influencers, the expected rebound was not detected. In the 4 weeks to 17th June, the total ecommerce channel increased by just 7.5% on a year-on-year basis, with beverage, food, and household products seeing the stronger growth rates.

O2O and other new retail formats are very well placed to meet the need for convenience, safety and quick delivery of fresh products, the demand for which has been significantly heightened both during and post lockdown. Many new retail companies were still able to operate during the lockdown and were less impacted by disrupted logistics and store closures compared to many offline retailers and traditional eCommerce retailers. This resilience and flexibility may be crucial for the future, due to continued demand for convenient, safe, fresh and quick delivery. This is clearly depicted in the consistent growth of O2O even under the lockdown; on a year-on-year basis, April and May delivered growth of 20% and 23% in the market value.

As the competition among major platforms heated up, economies of scale manifested as the “winner-takes-all”. In Community Group Buy, Meituan Youxuan and Duoduo Maicai combined took more than 80% of total market shares; and Jingdong Daojia alone ensured almost half of the aggregator market value. Owing to the lockdown, Community Group Buy enjoyed the most penetration increase, compared to Q2 of 2021, while the Warehouse channel also successfully maintained an increasing spend on each shopping trip.

Kantar Worldpanel reveals that upper-tier cities, as expected, led the growth as channel fusion was more active in a well-developed ecommerce environment. As certain shopping habits were formed when coming out of the lockdown and with bigger networks being established, new retail will further strengthen its capability and performance, providing even more convenience and efficiency for consumers.