FMCG in China reports a stable growth of 4.1% 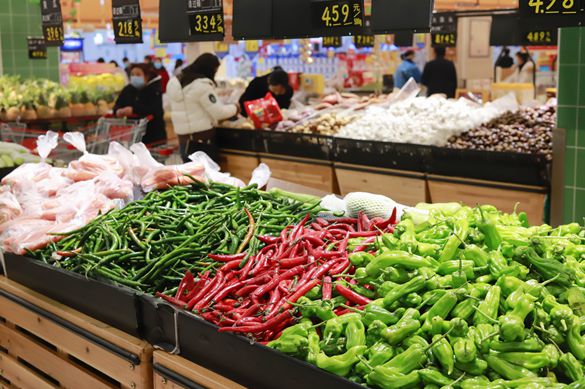 Kantar Worldpanel’s latest figures for 12 weeks ending 14th August 2020 shows consumer spending on FMCG in China reported growth of 4.1% in value, thanks to increased frequency. Lower tier cities outpaced top tier cities, while the East region continued to lead the market growth. Meanwhile, with the easing of the pandemic and arrival of the hot weather, the reduction in out-of-home consumption begun to show signs of bottoming out in upper tier cites.

Modern trade (including hypermarkets, supermarkets, and convenience stores) fell by -2.9% in the latest 12 weeks compared with last year. Small supermarkets continued their onward march with rapid growth of 7.3%, while hypermarkets suffered a more serious challenge with value decline of -7.1%.

Among the top players, RT-Mart maintained its leading position with 7.2% value share, recording a share uplift of 0.1 ppts versus last year, driven by both enlarged basked size and shopping frequency. Lower tier cities was their strong growth engine with a value growth of +4.7%. Besides the strong expansion of proximity stores, we have recently seen the first medium-size store: RT-Mart Super which was opened in Changzhou, showing a progression of their multi format strategy. Different from the traditional stores, RT-Mart Super is aiming to deliver more daily fresh products and offer an improved shopping experience, such as free cooking recipes and a service bell on the shelf. Besides, Younghui maintained its double digit growth in the past 3 months. According to the latest financial report, Yonghui’s revenue increased by 22.7% in the first half of 2020. Among the regional players, the Spar group showed the most outstanding growth, reaching 17.9%.

E-commerce continued its prominent value growth of 43.5%, as Chinese consumers have become even more accustomed to shopping online since lockdown. 72.3% of households in urban China purchased FMCG online over the last 12 weeks, which is a significant uplift in the shopper base. Alibaba remained on the front foot with 45.8% online market share (+1.7 ppts), while JD showing slightly decline in market share of -0.2 ppts. Among the top players, Alibaba group showed the strongest penetration uplift of 13.9 ppts, followed by Pinduoduo of 8.8 ppts. Pinduoduo recently launched its new community group-buying project, Duoduo Maicai, the aim of which is to increase MAU (monthly active users) through fresh food, which has high demand paired with high consumption frequency. 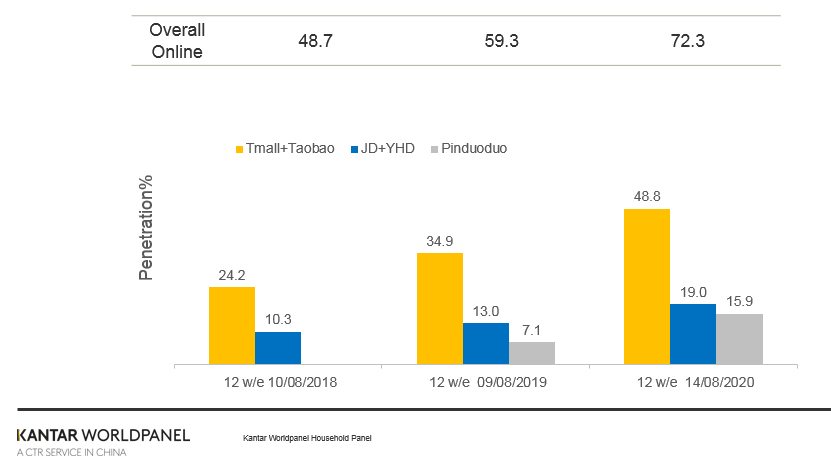