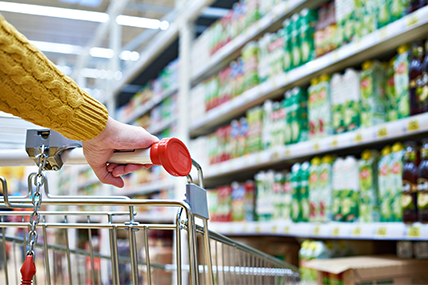 Mercadona led, in terms of growth, again in 2017 and consolidated its position as Spanish market leader with 24.1% of the market.

Household spending on groceries grew by 1.3% in 2017 according to the “Grocery Market Share 2017” report presented today by the consultancy company Kantar Worldpanel. This recovery was driven by increased demand (+1% of volume market growth), although the average price paid remained at around +0.3%.

In Spain, these figures mean that every household spent an average of 4,190 euros a year on their food and personal and household care products, which is up 1% on 2016. Most of the Spanish regions increased their spending, in particular the Balearic Islands, Murcia, Andalusia and the Basque country, with more than 2% growth. The regions with the highest spending per household are Catalonia (4,599 euros), Galicia (4,574 euros) and the Basque country (4,528 euros), and those with the lowest spending include La Rioja (3,557 euros), Extremadura (3,683 euros) and the Valencian Community (3,932 euros).

According to the conclusions of the report, one of the main catalysts for the market in 2017 was a growing consumer trend towards healthier habits. For households, it is not just important to follow a healthy diet (74% in agreement), but they are opting more and more for local or nearby products (69%), and they are prepared to pay more for products that help prevent illness (38%).

This healthier trend was also observed in packaged foods, which rose by 2.2% in value terms. The categories that grew the most in this sector were once again those most associated with a balanced diet: chickpeas (+13.3%), lentils (13.0%) and nuts (11.6%). It was also an outstanding year for organic food: products packaged with a bio/eco label grew by 14% last year, and they are now consumed by 4 in every 10 households.

The report also reflects how cooking habits in the kitchen are being transformed; grilled, boiled and oven-baked are the only forms of cooking that grow year after year, as do healthy options at other times of the day. For example, savoury breakfasts are gaining in popularity compared to sweet breakfasts (19% versus 81%, increasing by 6 points compared to 2012), and the consumption of fruit between meals also increased by +6%.

Mercadona and Lidl see the biggest growth among the big chains

From a retail point of view, the specialist channel continues feeding the growth of the modern retail channel, with one in every four euros spent on groceries (accounted for 26.5% of the market in 2016). The hypermarket is the only form within retail showing a fall in market share (13.3% compared to 13.6% in 2016), while “limited range” retailers (discount retailers such as Lidl, Dia and Aldi, as well as Mercadona) hold 36.2% market share, up one percentage point.

Mercadona led, in terms of growth, again in 2017 and consolidated its position as Spanish market leader with 24.1% of the market (up 1.2% on 2016). The other group that successfully capitalised on sector growth is Lidl, which increased its market share to 4.3%, up 0.2%. According to Florencio García, Iberia Retail Sector Director at Kantar Worldpanel, “Mercadona and Lidl are progressing with their store renovation programmes and aim to lead the way for new trends, to cement their position as market leader in the minds of consumers”.

Carrefour also increased its market share during the last twelve months and has consolidated its position as Spain's second retail group (8.7%, +0.2%), still benefiting from the acquisition of Hypermarkets from the Eroski Group. This retailer lost ground in the market for this reason (5.6%, -0.3%), while the DIA Group suffered from greater competition in its more classic shop format (8.2%, -0.3%). The sixth group, Auchan, suffered from the loss of attractiveness of the hypermarket channel (3.5%, -0.1%).

Florencio García adds, “all the players, in one way or another, tried to adapt to the current landscape with new shop formats (Carrefour BIO, DIA & Go, Alcampo Súper, Caprabo Rapid, etc.), with good general acceptance from consumers, and which should be consolidated in 2018”.

The Online Channel continues its slow but steady progress (1.9% of market share without fresh foods) and, in 2017, 4.7 million households made a grocery purchase on the Internet. On average, these households devote 8% of their budget to online purchases, which means 92% of their purchases are still made in physical shops, showing that “consumers are not foregoing physical shops, which must reinvent and adapt to the multi-channel onslaught to come”. Regarding the giant of e-commerce, Amazon, 56% of shoppers from the major chains bought a product from the website in 2017.

Regional Supermarkets continue making good progress and have established themselves as an alternative for consumers who are looking for quality, fresh, local and branded products. In this climate, the buying alliances (IFA, Euromadi) take centre stage in the sector, focussing on several of these chains that had a positive end to 2017.

Lastly, private label brands grew to represent 36.4% of spend on packaged groceries, up 0.3% on 2017. However, the impact of so-called “exclusive brands”, almost exclusively available at a particular retailer, saw retailer-associated brands jump by 0.8% to 41% of expenditure.