The latest supermarket share figures from Kantar Worldpanel in Ireland, published today for the 12 weeks ending 24 April 2016, show a robust performance for the overall grocery market as sales increased by 3.8% compared to last year.

David Berry, director at Kantar Worldpanel, explains: “As competition amongst the main grocery retailers remains intense, we’re actually seeing shoppers visit stores more often. Over the latest 12 weeks the average household has made 63 separate trips for grocery items, an additional four trips compared with last year. This is linked to a reduction in the overall size of the average grocery trip – which has dropped from €22.40 last year to €21.60 – as we see a rise in top up shops whereby consumers buy fewer items more regularly throughout the week.

“SuperValu remains the largest supermarket in Ireland, capturing 23.0% of consumer spend on groceries and increasing sales by 2.8% year on year. We’ve seen consumers continue to allocate more of their shopping budget to fresh food over the past four years, and SuperValu has managed to capitalise on this very successfully. Most recently the retailer has launched its ‘Good Food Karma’ campaign, which aims to inspire the general public to cook from scratch using fresh ingredients. The retailer saw strong growth across fresh staples in the past 12 weeks as a result: sales of fruit, vegetables, meat and poultry all saw healthy increases.”

Meanwhile Tesco remains in second place, with the retailers’ share of the market standing at 22.2%. Tesco has managed to sell more items this year but at a lower average price point – investing in low prices in a bid to win back customers. The result has been a dip in value sales of 0.7%, but volume sales have remained more positive, increasing by 2.7%.

David Berry continues: “The recent strong performance continues for Dunnes Stores, with sales growth reaching an impressive 8.0%. Bigger trips have been the main driver of this growth, with an additional €2.50 spent each time the tills ring compared with the same time last year. This is testament to the ongoing success of Dunnes’ ‘Shop and Save’ campaign: incentivising shoppers to spend more each visit in return for money off next time is a formula that has really worked for the grocer.”

Lidl has maintained its position as the fastest growing retailer – an additional 43,000 shoppers visited the grocer this year, and the discounter is getting customers through the door more often than ever before. The average number of visits per person increased to a record high of 10.6 trips in the latest 12 weeks, and has meant that Lidl’s market share now stands at 11.2%. Elsewhere Aldi has grown sales by just over 1% and now captures 10.9% of grocery spend in Ireland. 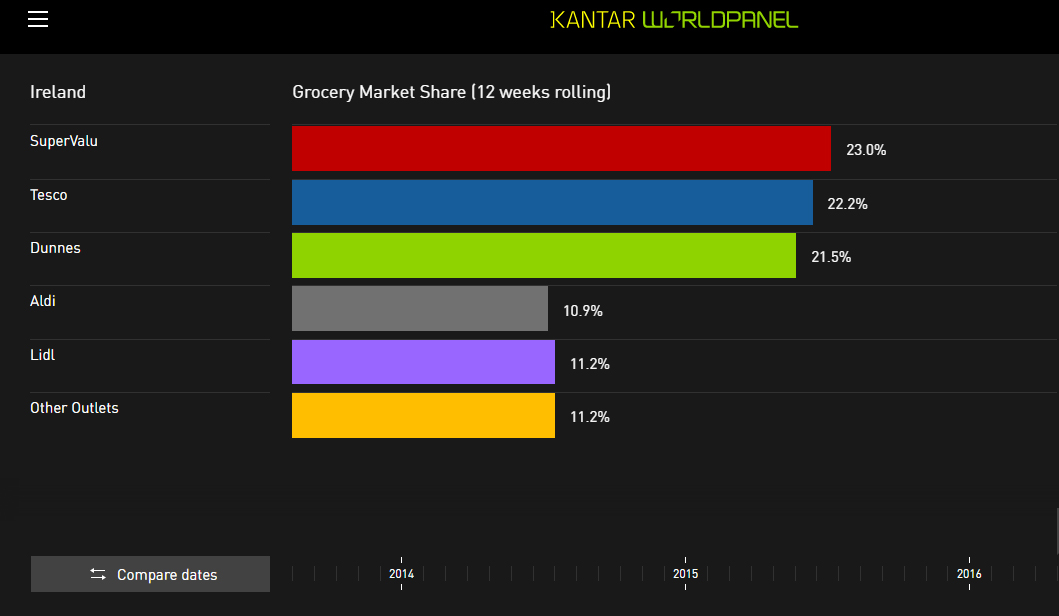