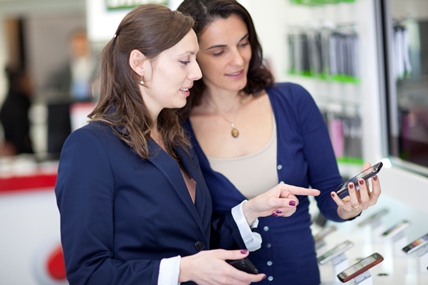 Samsung is the most recommended smartphone brand

As the smartphone market heads towards maturity, future sales and vendors' success rely on converting featurephone users to smartphones as much as luring existing smartphone users to upgrade. Hardware, fantastic as many of us see it, will not always sell itself. Understanding what drives first-time users to invest in a smartphone and how they can benefit from it is vital.

A new whitepaper from Kantar Worldpanel ComTech sheds light on what shapes the final leg of the smartphone purchasing process for consumers in the US, where the level of maturity and highly competitive nature of the market make it particularly challenging for vendors. Among the findings:

The US market's smartphone penetration stood at 55% in Q1 2014 and smartphone sales were 76% of overall mobile phone sales.

As much as US consumers can be familiar with the term "smartphone," they still do their due diligence before purchasing their devices. Only 30% of buyers in Q1 2014 did not conduct any research before buying a smartphone.

For the 70% who do conduct research prior to buying, recommendations and advice are huge influencers. One fifth of consumers interacted with store sales assistants before going back into a store to buy, and one quarter sought advice from friends.

While large consumer electronics stores have been lamenting the use of their stores as more of a showrooming tool to get advice and use smartphones "in the flesh," ComTech data shows that when it comes to smartphones, this concern is unfounded. In fact, 64% of US consumers purchase their smartphones in-store while only 24% buy online.

With 43% of buyers in Q1 2014 doing research online but only 24% actually buying, it seems that buying a smartphone is more a case of "webrooming" than showrooming.

Sixty-three percent of consumers who bought a device in Q1 2014 were recommended a Samsung device, more than double the recommendation for Apple, and almost 10 times more than Nokia.

Note to editors: The data in the report is based on consumers among the 20,000 panel members who purchased a mobile phone in the 1st quarter of 2014. Kantar Worldpanel monthly surveys are longitudinal and the sample is representative of the population.