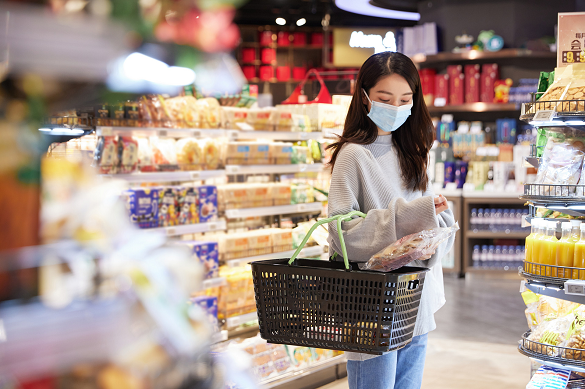 Kantar Worldpanel reports that the fast-moving consumer goods (FMCG) market reported a 1% year-on-year contraction over the 12 weeks to 22nd April 2022. The drop comes after China’s most recent Covid-19 outbreaks started from the beginning of March.

According to the latest government statistics, total retail sales fell by 11% year on year, posing a significant deceleration since the first COVID-19 outbreak in 2020. As millions of consumers were confined to their homes, FMCG in the 4 weeks to April 22nd went up by 1.4%, as consumers are stockpiled food purchases but moved away from non-food categories.

Strict COVID restrictions in Shanghai put severe downward pressure on FMCG, with value sales dropping by 19.6% in April, as food supplies were difficult due to disruptions in supply chains.

As consumers in major cities rushed to stockpile their fridge, modern trade managed to maintain steady performance despite store closures under the Zero-COVID policy. Sales value and the trip size of modern trade correspondingly grew by 2.4% and 2.9% in the latest 4 weeks, driven mainly by more purchases of staple food categories which grew by 9.9% in market value.

Among the leading players, Yonghui and Wal-mart managed to maintain their growth momentum from Q1. The sales value of Yonghui went up by 3.2% in the last 12 weeks. Sam’s Club continued to report stellar performance. On the contrary, Sun Art bore the blunt of contractions due to its East region focus, being hit more severely by the COVID disruption. Rising supply chain costs and store closures continued to challenge the profitability of brick-and-mortar retailers in 2022.

Ecommerce grew by just 1.2% in the latest 12 weeks with strict restriction in warehousing and transport. In Shanghai, Ecommerce took another 5.4 percentage points in market share in the latest 4 weeks, thanks to new formats of group buying which allows residents in the same apartment compound to buy fresh foods and packaged grocery together in bulk. The location-based approach based on Wechat helped Ecommerce giants like Pinduoduo to attract new users in Shanghai.

Amongst key Ecommerce players, JD continued its advance in penetration, by 0.8 points, while Alibaba saw some contraction in its buyer base in the last 12 weeks. At a national level, Douyin and Kuaishou continued to recruit new shoppers to buy FMCG products through their platforms, with 12.5% and 4.7% penetration reported respectively in the latest 12 weeks.