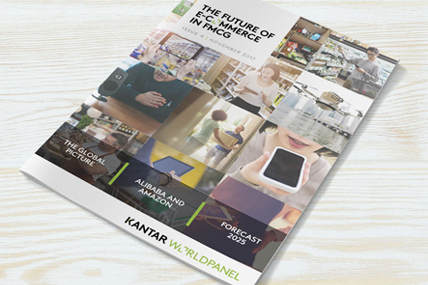 Sales of groceries through e-commerce platforms grew by 30% in the 12 months to March 2017, according to a new report by Kantar Worldpanel, published today.

“The fourth annual Future of E-commerce in FMCG study shows that e-commerce now accounts for 4.6% of all FMCG sales. Whilst the e-commerce channel is growing, the FMCG market as a whole is sluggish, increasing just 1.3% during the same period. Our projections show that in 2025, online FMCG will be a USD 170 billion-dollar business and hold a 10% market share.”

Key findings from the report include:

Latin America
There has been a slight increase in online grocery spend in Latin America over the past 12 months. The lack of trust in payment methods coupled with the overwhelming popularity of discount formats makes Latin America one of the most difficult regions for brands to succeed in the online world.
Throughout most of Latin America, e-commerce is lagging far behind traditional methods of shopping. The exception to this is Argentina, where e-commerce is exceeding usage compared to the rest of the region.

Incrementality
“We know that e-commerce is still cannibalising offline purchases. However, there is growing evidence that online formats – in isolation – are no longer the best option for winning share. It´s about how online and offline work together to create a better shopper experience,” says Stéphane Roger.

2025 Forecast
Kantar Worldpanel projections show that by 2025, online FMCG will be a USD 170 billion-dollar business, and hold a 10% total market share.

South Korea and China will continue to lead the way, and Asia in general remains at the cutting edge of online adoption. The big global uplift will come from the USA, predicted to rise from a 1.5% e-commerce share in 2017 to 8% in 2025. This can be attributed to the successful rollout of click-and-collect, delivery and subscription models, and the acceleration of disruptive models.